I ordered some yarn samples from a couple of wholesalers in an attempt to decide which base(s) I want to carry. For some reason known only to the internet gods, Paypal replaced my current address on one of those orders with that of the house we moved out of last September. Mind you, I deleted that address from Paypal’s website the week we moved.

And then, just to make it even funnier, the post office failed to forward the package to me, and instead went ahead and delivered it to the old house.

But! Proof that the entire world isn’t awful after all, the current tenant tracked me down on the book of faces and left the package with the neighbor (who is a friend of ours) and I was finally able to bask in the glory that is delicious, soft, squishy merino.

I’m pretty sure Lily would have actually rolled in it if I let her. She’s already insisting that the sparkle base is hers once it’s dyed. She’s accumulating quite a stash for someone who can’t knit yet. 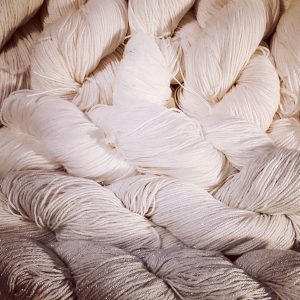